As each year, on the third Saturday of July, we saw thousands of people gathered at Mangal Bazar at 7 in the morning. All of them were there for the love for cycling, nature and had pledged different routes that they wanted to cover. Participants were meeting their group friends, individuals were waiting for the flag to roll down and hundreds of people were wishing luck to the cyclist. The aura around the place was full of energy, enthusiasm and liveliness. The area was covered with people from different age groups coming together at the same platform. It was amazing to see varied people from diverse walks of life involved for a common cause. It surely was amusing to notice young kids participating too.

The weather was clear as it was a sunny morning with no signs of rain. The blue sky looked beautiful as always as the birds flew in a fleet. Since Patan was one of the affected areas during earthquake, some monuments around the place were missed but the zeal of the people who were a part of the Kora Cycling challenge was noticed at the highest. Each rider wearing a red and white colour jersey was set with their cycles to complete the ride.

A quick breakfast was arranged for the participants. The flag went off for the first round of 100 kms at 7.30 am followed by 75 km and 50 km riders. The narrow lanes of Patan experienced thousands of individuals starting their rides. Each one of them pledged a distance and raised money from friends, families around the world for contributing to rebuild health facilities. 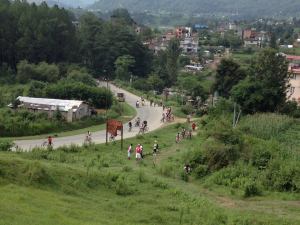 The routes were similar to the previous year as we crossed Ekantakuna and head towards Bhaisipathi. The volunteers were around showing us the way towards our
next destination. While crossing the bridge at Chobar, and looking at the greens

around, made me realize once again how blessed we are. The uphill rides were tiring and for the ones who cycle once a year it was getting tricky. We came across people whose cycle broke down; chains were giving a problem as they were getting them fixed. Everyone was helping each other around and as I was riding I met a cyclist who explained how the timing of change in gear has to be perfect. If one can grasp that, the ride becomes way easier with lesser effort he said. I was trying to follow the same, but after 30 kms the scorching sun made me weak and I took a detour. As I did not reach the finish line, unlike last year, the experience of riding was surely one of the most memorable ones.

Since this was the second kora experience for me, there was a difference in routes that I experienced unlike last year. A difficulty while riding downhill because of the potholes on the lanes and the rains of the previous day made riding a challenge. The previous year had more signage, volunteers compared to this time. Undoubtedly it was a bigger and amazing event and kudos to the participants.

If you do not know about Kora, here’s a little something 

So make sure that you keep yourselves free the third Saturday of July’ 2016 .